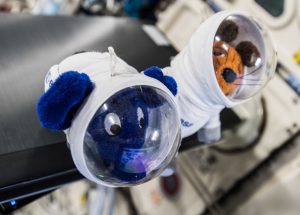 Japanese scientists found no significant changes in the reproductive function of mice after one month of life in the ISS. Researchers have discovered that the same genes work in sperm as “land” mice are also mobile and fertile. The work was published in Scientific Reports.

Flying into space involves many risks: stress during takeoff and landing, weightlessness and cosmic radiation. All of these factors can affect mobility, fertility and the condition of sperm DNA.

In previous research, scientists discovered space rats produced less sperm. In another experiment, frozen and dried mouse sperm were sent to space. Upon their return, they were able to fertilize the ovules, but the researchers found traces of radiation damage in them.

Space mice
Now Takafumi Matsumura and scientists from the University of Osaka have developed a new way to investigate the effects of space on the reproductive capacity of mice. They sent two groups of animals to the ISS: one spent 35 days in microgravity, and the other was in a centrifuge, which artificially creates gravity conditions similar to terrestrial ones. The third group lived on Earth and served as control.

After the animals returned from space, the authors verified the status of their gonads. They found that the auxiliary glands, the prostate and seminal vesicles, decreased in size in both “space” groups compared to the control. However, histologically, they were not different, and the gene expression profile also coincided in the three groups, showing no signs of pathology.

Then, the researchers examined the state of sperm in experimental mice. In all three groups, they did not differ morphologically. The sperm of both groups of “space” animals swam a little more slowly in a straight line, but otherwise remained mobile. Their DNA was the same length as that of “terrestrial” mice, that is, it had no additional interruptions. Finally, the sperm of the three groups fertilized eggs with the same success: about 87%.

The embryos obtained from these eggs were planted in mice, and they gave birth to healthy mice. Neither in appearance nor in growth rate differed from each other. In addition, they crossed each other and received the third generation of mice, in which the researchers also found no trace of their grandparents’ cosmic past.

The authors of the article conclude that they failed to detect any effect of microgravity on the reproductive capacity of mice, either externally or at the molecular level. It is true that they do not exclude that the effect can manifest itself on a different level: epigenetic, as was the case in a recent experiment with twin astronauts, one of whom went to the ISS and the second lived on Earth as a control.